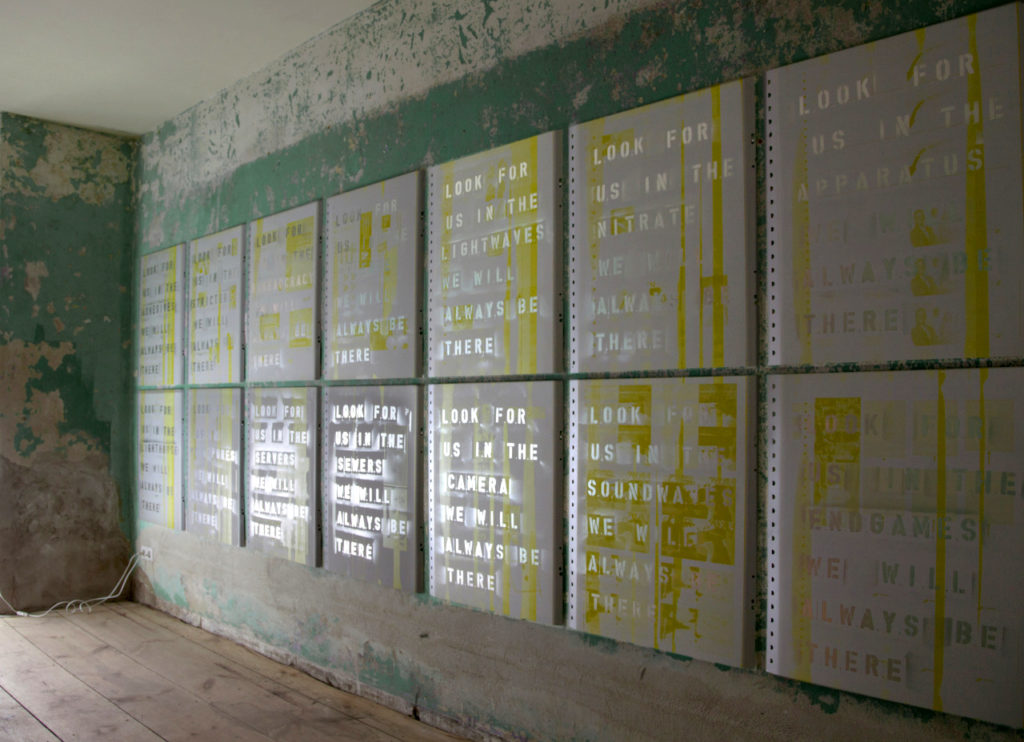 Second instance of RULE C
a programme by Atelier Impopulaire

Look For Us in the Inkwells We Will Always Be There

independent of time the story began to unfold. the private and public mythologies developed and gained credibility as a response to their catalyst character. the seemingly metaphysical consumption could no longer be judged by formal or materialistic reasons. not the producer but the recipient was the basis for mystifying subsequent aesthetic work. by obscuring historical facticity he was able to understand the contemporary sciences, by ignoring the bourgeois audience that inserted itself the programs and showed no intention of questioning them. in his division he would create a micro utopia, a therapeutic ideal with an attempt to participate. »a modelled, virtual better.« a social contract between the inter-subjective and the transformable potential, everything the moment of utopian possibility had to offer. the non-existent would be in his very hands, the unnoticeable obvious, utopia itself!

as he looked out, divorced from the real interests of individual and community, looked at their illusory lives, he immediately forced himself to his passionately multiplied productive forces. the one exclusive sphere of activity, the first of all realities as a mutual independence of all individuals and their intercourse with one another. because as long as man remains, mans own need will be an alien power which enslaves him. for there was so little that could change mans imagination. but finally the vehicles meant to change to a new course were ready, and they would offer room to everyone.

pages of devotion, mentally challenging, but unimaginably bright. the fleeting world literally uncovered itself in front of his tired eyes. nowhere ever so close to the importance of the idea. the relevance of the moments captured onto the blank pages. the fleeting visions of the powerful mind, which can never fully reveal itself. hundreds and thousands of absorbed worlds laid out before him like a field that in itself was timeless and time itself, a field that was nowhere and anywhere. an entire universe before the forces of natural fading could grasp the humbling soul into nothingness. the tension inside the small room was rising, he had it all here, could be who ever he pleased to be, read other peoples minds, understand their very notion of being, could give sense to their existence, lead them and be led. in this moment he felt the desire to live among all utopian aspirations and to prove that their endlessly diverting alternatives would outlive all form!

Look For Us In The Inkwells is an exhibition developed for Atelier Impopulaire’s RULE C series at Archive Kabinett, which includes works made by and around four separate but interconnected collective projects: A.P.E. Art Projects Era, Feminist Land Art Retreat, Rhein Verlag, and Studio for Propositional Cinema. Over the past couple of years, each of these projects have interweaved at various nexus points, though hosting each other’s exhibitions, publishing and printing each other’s books, texts and posters, starting joint ventures together, and otherwise proving a dialogue and context for their work. Focussing on polemical forms of language distribution, this exhibition marks the first of several future projects in which Atelier Impopulaire will be implicated within this network.

A.P.E (art projects era) wants to challenge the limitations of given structures. The aim of the organization is to develop projects (performances, exhibitions, printed matter, meetings) that cannot necessarily be realized within traditional institutional formats or frameworks.

Feminist Land Art Retreat / an act or instance of escaping: as / flight from confinement / evasion of something undesirable / leakage or outflow / especially of a fluid / distraction or relief from routine or reality / a means of escape / a cultivated plant run wild

rhein-verlag, founded in 2008, is a loose collective of artists, who share a common interest in the book as an artistic medium. this was the motive which inspired us to found a publishing company. rhein verlag enables us to publish and distribute the artist books we make. each book is considered to be an independent and self-contained piece of art and is devised and produced as such.

Studio for Propositional Cinema was inaugurated with a public call to action in 2013 at the Kunstverein Düsseldorf. Through language, actions, sounds, and images, through production, publication, exhibition, and fictions, they seek to reconfigure culture from a network of ideological formations into a dialogue of hypothetical gestures.

RULE C is a project developed by Atelier Impopulaire for Archive. As a site-specific programme of talks, screenings, exhibitions and performances, it takes place as a spontaneous open community formed by friends, artists, thinkers, curators, cultural producers. Born out of the need to critically reflect on the present and the future of collaborative artistic practices, the programme wants to be a lively organism, a ‘work-in-process’ which presents the results of concrete collaborative acts in different site specific events combined with a series of booklets.